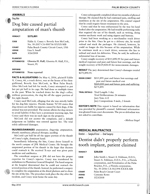 FACTS & ALLEGATIONS On May 6, 2016, plaintiff Eddie A. Coney, 66, a truck driver, was at the house of his then­ girlfriend, Beverly Ann McCook, in West Palm Beach. After McCook had left for work, Coney attempted to put her pet pit bull in its cage. He had done so multiple times in the past. When he reached down for the dog's collar, without provocation, the dog bit off the upper portion of his right thumb.

Coney sued McCook, alleging that she was strictly liable for his dog-bite injuries. Florida Statute 767.04 states that dogowners are liable for injuries caused by their dogs, if the animal was not provoked. The statute allows for dog owners to avoid liability if they have a prominent warning sign, but Coney said there was no such sign on the property.

McCook did not answer the complaint, and a default judgement on liability was entered against her. The trial solely addressed damages.

INJURIES/DAMAGES amputation, fingertip; amputation, thumb; numbness; physical therapy; swelling McCook's pit bull bit off the  upper  portion of the  thumb of Coney's right, dominant hand. Immediately following the bite, Coney drove himself  to the north campus of JFK Medical Center. He brought the amputated   portion  of  his  thumb  in  the  hope  that  could reattach  it. He  received  X-rays and  was given pain Coney subsequently completed about two months of physical therapy. He claimed that he had continued pain, swelling and numbness at the site of the amputation. His counsel argued that he could require future treatment to the area.

Coney said that he was embarrassed by the way his hand looked after the amputation. He had trouble performing tasks that required the use of his thumb, such as writing, doing routine mechanic work and using zippers and buttons.

Coney had been working as a merchandise truck driver prior to the bite. Once he got to a delivery site, he would unload and stack the packages. He claimed, however, he could no longer do  this  because  of  his amputation.  While he continues work as a truck driver, someone else has to unload and stack his deliveries. Thus, he said, he suffered a substantial loss of income.

EDITOR'S NOTE This report is based on information that was provided by plaintiff's counsel. Additional information was gleaned from court documents. The pro se defendant was not asked to contribute.